http://www.dec.ny.gov/docs/regions_pdf/owasco.pdf
Posted by Sandie at 9:15 AM

“Grassroots groups play a key role in the development and promotion of our state’s many parks and trails which make such a significant contribution to the economy of our cities, towns and villages as well as to the health and well-being of their residents,” said Robin Dropkin, Executive Director, Parks & Trails New York. “Made possible by a generous private donor, these nine grants are a small investment in strengthening our state’s not-for-profit park and trail organizations that will reap big benefits, enabling these groups to leverage more private funding and marshal more volunteer power to better fill the gaps in government spending created by challenging economic times.”

Awards were also granted to:

Parks & Trials New York is a statewide not-for-profit organization that has nurtured New York’s park and trail movements for more than 20 years, helping hundreds of groups and municipalities build, maintain, and promote parks, greenways, and more than 1,200 miles of multi-use trails

More information on the grant program and Parks & Trails New York can be found on the website, www.ptny.org or by calling 518-434-1583.

Posted by Celeste Carmichael at 9:37 PM

2009 Projects in the Owasco Flats

In 2009, the OFNR will be putting up signage in the Flats. Thanks to the Millard Fillmore 4-H Group, who raised the money to purchase the signs by conducting bake sales during 2008. The signs will be placed along the trail, at the trailhead on Route 38 and at the marina entrance. If you have any questions or comments, please contact Sandie at owascoflats@gmail.com

We will be scheduling our annual Canoe/Kayak trips for the summer of 2009. Please contact OFNR if you are interested in participating or leading a trip, please contact owascoflats@gmail.com

The OFNR received a $55,000.00 Invasive Species grant to treat Japanese Knotweed along the Owasco Inlet and along Route 38. We are looking for in-kind services as a match. We will also be contacting landowners in the near future to discuss treatment of this highly invasive species. For more information, please contact owascoflats@gmail.com

We will also be administering the 2nd phase of the Aquatic Invasive species grant (a $30,000.00 grant received in 2006) this year. For more information, please contact owascoflats@gmail.com

We will continue to treat garlic mustard by pulling plants in early May to reduce the spread of this highly invasive plant. If you are interested in volunteering, please contact owascoflats@gmail.com

Poision ivy is found in the Owasco Flats, so please make sure that you wear long pants, and boots or shoes to prevent walking through poision ivy.
Cayuga County Parks and Trails will help us maintain the trails, which includes spraying for poision ivy along the railroad bed.

The OFNR wishes to install a covered, wooden educational kiosk that will display the Owasco Flats Nature Reserve, the trail system, canoe launch, and important information about the ecology of the Flats. We have been trying to raise the necessary funds to purchase the lumber and the signage needed for the kiosk. If you would like to contribute to this effort or to the OFNR, please contact owascoflats@gmail.com
Posted by Sandie at 11:58 AM

Jack grew up in Long Island, New York at the time when Long Island was mostly rural. He witnessed the growth and expansion of New York City out on the island. During a 20 year period, Jack became increasing concerned about the loss of open space for people and for wildlife. He missed exploring the agricultural fields and woods that seemed to go on forever.

Jack moved to Moravia and began exploring the open space of the Finger Lakes Region. Then he discovered the Owasco Flats. It was the one place that gave him the sense of wonder and freedom that he knew as a child. Jack wanted to help protect this valuable area for the public, mostly children, to enjoy. One day, Jack was visiting the Flats, picking up trash and talking to other visitors, when he met a group of people who were also concerned about protecting the Flats. They were outraged that the Flats was being used as a dump, that the road was impassible, that the trails were non existent and the wetland areas were being ditched and drained. It was then that Jack was introduced to OFNR original members, Jean Siracusa, Paul Lattimore and others and immediately joined the committee.

Jack dedicated 15 years of his life as a land steward; maintaining trails, picking up trash, educating the public on the importance of the Owasco Flats wetlands. He explained that Owasco Lake was Auburn's drinking water source, as well as lake owners and that the Owasco Flats wetlands work to filter drinking water, provide important spawning areas, absorb flood water and provide valuable habitat for wildlife. He became a respected steward of the Owasco Flats. In addition, he did his best to make every meeting, bringing along pictures, and sharing his stories.

Jack and his wife, Judy moved to Auburn in 2007. His family has grown up and moved on, but still expanding with son-in-laws and grandchildren. In November 2008, at the OFNR Annual Board meeting, Jack announced his resignation from the OFNR board. Jack said it was time to spend more time with his family and enjoy the simple pleasures of retirement. If you happen to run into him at the Flats, tip your hat and thank him, for if not for people like Jack and Jean and Paul and many others, the Owasco Flats would have been developed, an extension of the many homes along the lake, or a commercial business. The wetland would have been filled like Cayuga and Seneca Lakes, and the area would not be open to the public to enjoy.
Jack will remain an honorary member of the Owasco Flats.
Posted by Sandie at 5:41 PM 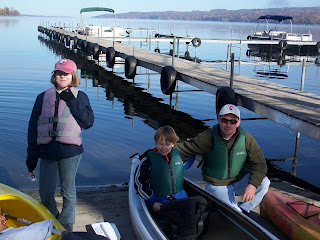 In May seven Junior members of the Millard Fillmore 4-H Club were asked to serve as consultants to the Owasco Flats Nature Reserve. Youth, afterall, add a unique perspective about trail use - especially when the question is "how can we make this trail and natural area more family friendly".

The youth, grades 4th - 9th, hiked the loop trail and came up with several no-nonsense goals for the Owasco Flats Nature Reserve. The most basic of the responses included formalizing the trail. "How would someone know that this is a trail?" stated Brenna O'Brien as the group hiked the overgrown old railroad bed that parallels Rte 38. Club members also thought that a kiosk with information about the unique plants and animals in the area, and the history of the LeHigh Valley Railroad would be interesting, informative and would attract attention. They also suggested that signs near the water showing the common fish you can catch would be of interest to the fisherman. The other very common observation related to the overgrowth of poison ivy in the area. In many locations it was knee deep, and in all instances it is growing up the trees along the trail path. "There must be a way to get rid of poison ivy, other nature trails have to do it", commented Anna Carmichael, 11.

A couple of other very simple suggestions were offered: "The trail needs a litter clean up and signs to help people remember to clean this beautiful area up", commented Cara Carmichael, 10. Most of the trash found was left by fisherman using the area. Fishing line as well as bait containers and beverage bottles littered the Inlet side of the trail. And while the group counted more than 11 fire rings informally built by fisherman using the area, the youth thought that these areas could be formalized for safety and beautification. "If people are going to build fires here anyway, there should probably be fire pits where there is less of a chance of a forest fire", stated Brenna O'Brien, 11.

More sophisticated ideas were also suggested to enhance the use of this area by families. Club members suggested: a boardwalk over the muddy areas, and another boardwalk into the wetland area as a bird observatory, and occasional benches for watching the water and wildlife. And "If you really want to make this place fun for kids, you should add a forest playground, or swings to the parking area", added Summer MacAdam Gorham, 11. The youth also discussed the benefits of widening the trail for use by mountain bikes.

Club members appreciated being introduced to the scenic landscape and recreational trail offered by the Owasco Flats Nature Reserve. They really appreciated that their opinions were asked and that they were listened to. Since last May the Millard Fillmore 4-H Club has raised money to buy trail markers for the nature trail, helping to fix one of the problem areas that they saw. They have also taken a kayak/canoe trip up the Inlet and are committed this year to learning more about the history of the Owasco Flats and Cascade. No doubt, these youth are pleased to be partners in spreading the word about the gem that we have in this natural area.
Posted by Celeste Carmichael at 7:39 PM

The Owasco Flats Nature Reserve, Inc. is a 501(C) 3 organization working to protect the ecological integrity of the Owasco Flats through stewardship and conservation.

OFNR Board of Directors 2015

Sandie Doran, President of the OFNR since 2007.

Paul Lattimore Board member since 1990.

Howard Nelson Board member since 1994.

John Scollan Board member since 2005.

Shirley Jones Board member since 1994.

Ann Moore Board member since 2006.

Noelle Rayman Board member since 2010.

Peter Rogers Board member since 2012.

Jeff Trescot Board member since 2012.

Steve Green Board member since 2014.

We have one position available on the Board and are looking for someone to serve as Treasurer and Secretary. If interested, please contact Sandie Doran at owascoflats@gmail.com


Reasons to Visit the Flats

DEC Management Plan for the Flats